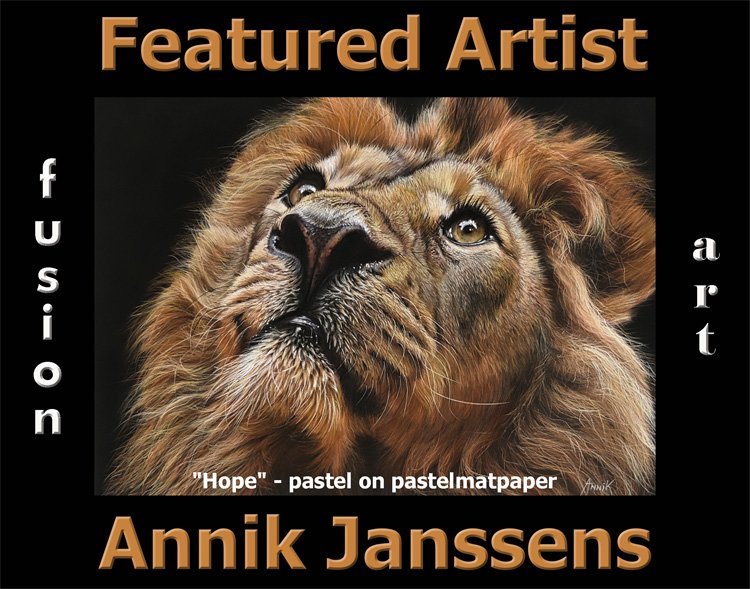 Annik Janssens is an internationally acclaimed, award-winning animal and wildlife artist.  She is based in Belgium and her realistic animal portraits capture the essence of these often majestic animals.

Drawing animals has been Annik’s passion since childhood and she spends as much time as possible outdoors, preferably in the forest where she observes and photographs nature in peace and quiet. Her love and interest for nature is not only limited to the animals that live in it. She is enormously fascinated by, and recently started drawing, landscapes.

Annik won Best in Show in Fusion Art’s 4th Annual Into the Wild Art Exhibition, which can be seen on the main Fusion Art website.

Annik Janssens has had, throughout her life, a tremendous passion for animals and everything that has to do with nature. Ever since she was a little toddler all she wanted to do was draw 'critters'. However, shortly after her training as a graphic designer, she put the pencils aside and took a completely different path professionally. Until a few years ago someone asked her to make a portrait of his dog, then a second portrait followed, and she has been unstoppable ever since. Annik strives to convert her passion for animals into realistic pastel portraits where she tries to approach the character of the animal as much as possible.

I was immediately fascinated by the gentle gaze of this lion. This mighty magnificent animal, known to all as the king of the jungle, is having a hard time. Due to habitat loss and hunting, their numbers have declined by 40% over the past 20 years. But in his gaze there is no anger, no revenge, but HOPE. More people are becoming aware of the threats facing this fantastic animal. More organisations are working to raise awareness. The efforts are successful, albeit small, but there is HOPE! I started with the eyes, the underlayers with panpastel and details with pastelpencils. At the end, I applied the black background. Reference photo: R Winkelmann.

Visit Annik at the below links to learn more about her, her art and to buy or commission an artwork from her.

“I am watching you”