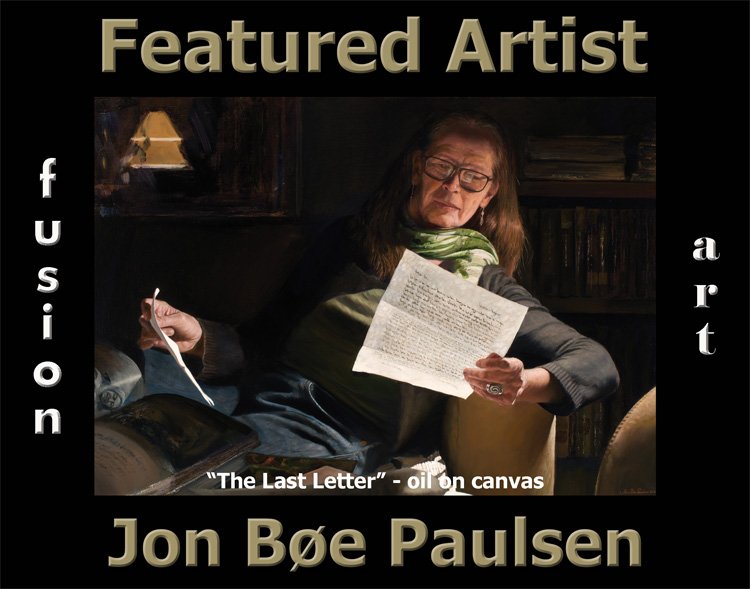 Jon Bøe Paulsen is an internationally acclaimed, award-winning neo-realist artist. He is based in Oslo, Norway and has been painting for over four decades. His works are in collections worldwide and have been awarded in exhibitions in Norway, the United States, France, Spain and the United Kingdom. He studied at the School of Museum of Fine Arts, Boston, MA, USA. He also attended the Norwegian State Art Academy and the Eksamen Artium, both in Oslo, Norway.

He considers himself as an artist belonging to the group of new realists where the human subject is looked upon in a new light and painted strongly figurative. Known as Clair Obscure, this technique is a form of painting in which the light-dark contrasts are portrayed more strongly than they are often in reality. This produces a dramatic effect that accentuates three-dimensional shapes.

One is Jon’s favorite subjects to paint are human beings that are trying to look into their souls. He loves that subject because it challenges his ability to tell a story with one simple painting. Jon’s hauntingly realistic paintings provide a suggestive glimpse into the emotion-filled recesses of the mind as he creates fantasy and desire with each sensuous brushstroke.

The featured image artwork on this webpage, “The Last Letter”, won First Prize in Portrait Now! 2021, hosted by The Carlsberg Foundation at The Museum of National History, Frederiksborg Castle, in Hillerød Denmark. The painting features a woman who is receiving the final letter from a relative who is about to fall victim to the corona epidemic. Jon’s girlfriend, Heidi Kelday, was the model for the portrait and the inspiration came from a real letter from her niece, who lives in Hawaii and was planning to move.

Jon Bøe Paulsen is a prize winning painter from Norway whose neo-realist portraits have gained him international exposure over the last four decades. His introduction into the art world was through theatre workshops in high school, where he learned the art of self-control. In the same manner, Paulsen paints to convey single narratives with strong characters, using minimal light and a restricted colour palette to let his subject last longer in the eye of the viewer.

Being a painter suits me perfectly since I like to be my own master. The meaning of Clair Obscure, in Italian chiaroscuro, is light in the darkness. Classical paintings of that order last longer in the eye of the viewer because of their restricted use of colour. That is some of the reasons why I work with plain and few earth colours and very seldom part from that rule unless it is absolutely necessary. To be able to convey a story with one single painting. I've never forgot the rules and it was useable in oil, watercolour and charcoal as well. One of them was: "Don't be too tough with you pencil when you draw. Not too much information when you catch the line. Do not underestimate your audience". Your art must go in a direction where the photograph cannot follow!

Visit Jon at the below links to learn more about him, his art and to buy or commission an artwork from him.